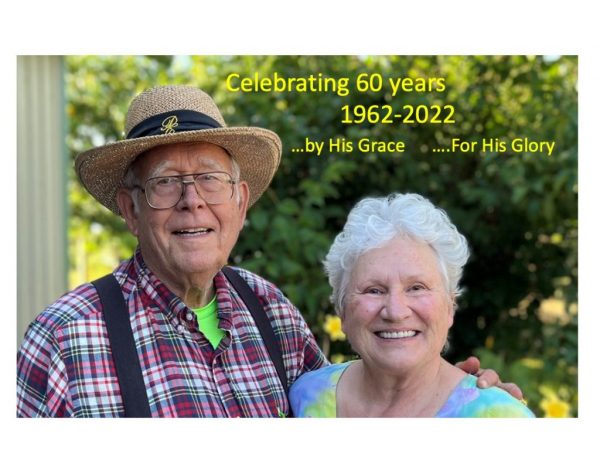 They married on August 25, 1962 in Elaine’s hometown of Newark, a small Erie Canal town in upstate New York.  Bob had completed a degree in conservation, a forerunner of Environmental Sciences at Cornell University. Elaine had a B.S. in teaching from Oswego State Teachers College.  They left family and friends immediately after the wedding and drove straight to Lafayette, Indiana where Bob was to start a Master’s program.  This began a marriage-long habit of travel which took them from: Indiana to Corvallis, Oregon; East Aurora, New York; to Syracuse, New York; and then New Delhi, India for two years where Bob participated in a USAID training program for Indian Federal and State officials in soil and water management.  Following India, they moved to Denver, Colorado, then Washington, D.C., and finally to Portland, Oregon where Bob eventually retired from a 29 year Career with the USDA Natural Resource Conservation Service.  During these years of travel, Elaine kept up her career in teaching, finding positions at each of these locations, and ended up as an ad hoc faculty member at Lewis and Clark University in Portland, OR.

Invited to visit Sequim in 1989 by a retired colleague, they jumped on the opportunity to buy into a small rural town that had mountains, sunshine, farmland, nearness to salt water, clams, crabs and fishing. Retiring themselves and moving in 1994, they spent their first years in Sequim building a home on 5 acres of hard scrabble pasture, the produce of which they shared with their neighbor’s beef cow enterprise.  Following the adage of: “If you build it, they will come!” their family has poured in annually, mostly in the summer, where at one time, they had nearly 40 people staying over occupying the house, the barns and tents scattered around.

Recognizing Bob’s agricultural program experience, County Commissioner Martha Ireland (also their next door neighbor) named Bob to a county advisory committee whose task was to provide recommendations to improve the protection of our agricultural resource lands, a job mandated by Washington State government.  This was all the start that Bob needed.  Deciding that the county would never be able to do everything needed to protect our farmland, he teamed up with a group of environmentally committed locals and developed Friends of the Fields, a non-profit foundation devoted to facilitating the protection of farmland primarily through purchase of development rights.  Needing additional funding to effectively carry out its mission, FOF later sponsored a ballot measure, the Buyer’s Excise Tax that would impose a small (1/2 of 1%) tax on Real Estate purchases in the county with the proceeds to be used for voluntary purchases of the rights to develop certain appropriate farmlands.  Opposed by local realtors and the state association of realtors, the measure was defeated across the county except in Sequim.  FOF and its mission voluntarily joined the North Olympic Land Trust where the effort to protect farmlands continues successfully to date.

Meanwhile, Elaine was occupying her time becoming involved with the local community theater group, Olympic Theater Arts. First painting sets, then acting in occasional productions and finally rising to become President of the Board, Elaine took on the daunting task of finding OTA a new home. The Howard Wood Theater was small, unsafe, hot in the summer and cold in the winter and very limiting in the productions that could be presented.  Elaine led a search for acceptable new quarters and found them in the old Methodist Church at 714 Sequim Avenue.  She led the successful $1.6 million funding drive for the purchase and the rebuilding effort.  She used an interest-free $100,000 loan from her deceased Brother Norman’s estate to fund some of the early demolition work and later gave the entire $100,000 to the Theatre as a donation.  The Caldwell’s contributions to management, financial and hands-on construction assistance were deemed so valuable that in 2010, the completed 162 seat theater was named the Elaine and Robert Caldwell Main Stage Theater.  This honor was awarded at the first production in the theater, a beautifully produced sellout run of the esteemed play “Cabaret”.

In 2006, the Sequim-Dungeness Chamber of Commerce named Bob and Elaine “Citizen of the Year” for their outstanding contributions to the community and the couple was again honored in the Sequim Irrigation Festival Parade in 2010 as Grand Marshals.  The Caldwell’s continued to serve on local boards and committees including County advisory boards, as congregation president of a local church, the board of a local irrigation water district, the ongoing work of the local Community foundation, a nonprofit environmental education center, a nonprofit housing facility for recovering women and a community garden venture.  Whenever and wherever a community need popped up, Bob and Elaine seemed ready to jump in with both feet!  However, on the occasion of their 60th wedding anniversary, they’ve decided that it’s time to kick back and enjoy some of the other attributes of Sequim, a small rural community with mountains, sunshine, farmland, nearness to salt water, clams, crabs and fishing.  And wonderful people!

Click on the first image below and all the images will open in a sliding lightbox.