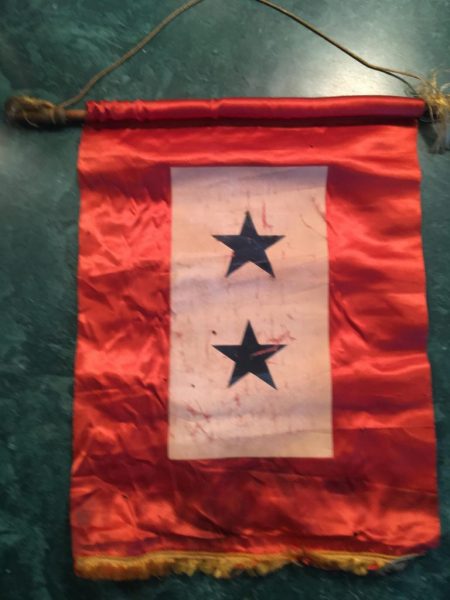 This banner hung in the front window of the home of August and Henrietta Boekman on Pershing Avenue in Buffalo, New York during the WWII years of approximately 1943 to 1945. The two blue stars honored the ongoing service of two Boekman offspring in the war effort, Robert and Ruth. If either of the stars had been turned to gold, it would have signified that they had given their life in that effort. Thanks be to God, they were not. Returning in 1945 from wartime service in Guam, Bob kept this banner in his possession until his death in 2005.

The Pershing Avenue home was a small wood frame house on a narrow cobblestone street adjacent to Buffalo’s Civic Stadium and to Lang’s Brewery and Lang’s Bakery. The brewery and the bakery each lent a marvelous fragrance to the air. The yeasty smells of bread baking and beer fermenting were supplemented by the smell of the horses stabled on site. On Sunday mornings ca. 1945, a young boy could sneak out of the house before Grandma came downstairs and go watch the horses being exercised because they didn’t have to work that day

Many horses continued to make local deliveries during the war because gasoline was rationed. Horses only ate oats – – tanks and planes didn’t need oats. The bakery wagon, the milk man and the rag man are well remembered. The horses generally knew the routes and slowly paced unattended down the street to meet up with their door-to- door delivery man when his basket was emptied. Such changes in 75 years – – so glad to have those memories.

Horses didn’t make all the deliveries in this neighborhood. Uncle Paul Sydow, before he was Uncle Paul and before he joined the US Marines, lived down the block on Pershing with his family. When he was a youngster, he would pull his wagon up to the brewery to get a pail of beer for his father. Can we imagine any such thing today; and what happened to the carbonation after a return trip over the cobblestones? Was there carbonation in those days?

There are a lot of memories tied up in this banner besides the wartime sacrifices. It’s like a window into another time. Martha and Bobby Caldwell lived on Pershing Avenue and attended School 48 during the time Dorothy was in confinement. Twenty some years earlier, Dorothy and her sisters and brother all went to the same School 48. And, when Francie came home from the hospital as a newborn, even she lived on Pershing Avenue. This banner hung in the front window and watched over things happening on Pershing Avenue through a momentous era. It can connect us all to that simple but significant period of time.