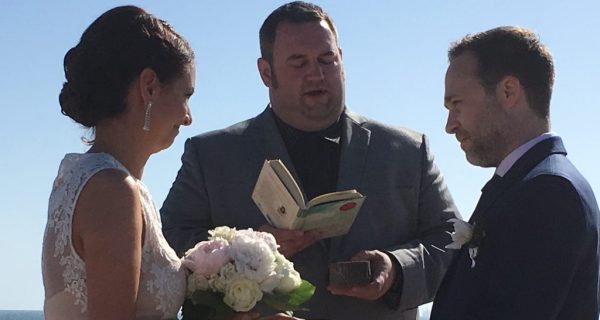 On Friday, May 3rd, John and Hayley got married.

The wedding was held on the beach at Bolsa Chica State Park on a beautiful, Southern California day with the sun shining brightly and a light breeze which kept the temperatures down.

I was very proud to propose a toast to the happy couple from John’s “Parental Unit” which consisted of me and Colleen, as well as Kirin and James.

Having been a member of the U.S. Coast Guard for 32 years, I had the opportunity to work with many extremely dedicated and hard working professionals.

The firefighting professionals that I had the pleasure of working with are an amazing group!  When called into action, they drop what they are doing and charge forward into dangerous situations where the challenges are unknown.

The Caldwell extended family is honored to have two firefighters in the fold. Linsay and Nick Pellegrini – married, parents of 2 and ready to jump into dangerous situations when called.

The call came recently when several large fires simultaneously raced through the dry Southern California forests and urban settings. Both Nick and Linsay responded. Nick, who is a Captain, was assigned to the Skirball fire and stayed on-site for 4 days battling to save our precious resources; sleeping whenever possible while still dressed in full gear and oftentimes in the fire response vehicles.  Linsay, who is a Fire Investigator, served in the LA operations center where she provided logistical and operational support for all the fires.

I would like to thank both of them for their unselfish service and willingness to respond to the call, knowing that there is a very real potential for being involved in life-threatening situations.

Thank you Linsay and NIck!

Additionally, I don’t want to forget cousin David Hataway.  He was an LA and Orange County firefighter for more than 20 years and answered these same calls on many occasions. He has been retired now for many years, but I feel that he deserves the recognition also – Thanks Dave!

Merry Christmas from Colleen and Steve! 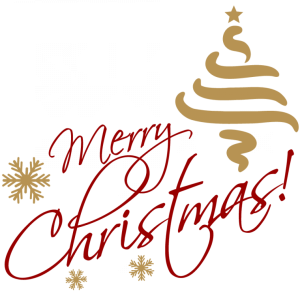 This last year was notable for one heartbreaking tragedy.  On March 17, we lost Colleen’s daughter Brandi.  She was 43 years old and passed peacefully in her sleep in Lake Havasu City, AZ where she lived with her husband, Gary.

Her family and close friends gathered together and a memorial service was held to commemorate her life.  We have set up a memorial website in her honor and would appreciate if you could visit it and pay your respects – https://www.forevermissed.com/brandi-ann-rowe.

The family is coping as best we can, but we all miss her generous, enthusiastic spirit as well as her upbeat, optimistic attitude. We miss her tremendously!

We will soon have a new family member.  Steve’s son John is getting married!  On Feb 19th, he proposed to Hayley Kristinnson and they are planning a mid-2018 wedding. Hayley is a wonderful, lovely person and is a psychologist working in Los Angeles at the Sports Concussion Institute as a Postdoctoral Fellow in Clinical Neuropsychology.

Additionally, Hayley is a Canadian by birth, but in August, she completed all requirements to become a U.S. Citizen and her swearing in ceremony was held on August 22.

Also in August, several of the family traveled to Sequim, WA to visit Bob and Elaine at their home on Llenroc Farm.  They kept us busy!  We started off at the Clallam County Fair, then displayed one of Bob’s Ford Model “A”s in the local car show.  And when the big Solar Eclipse happened on August 21, we were ready.  However, even though the Sun was eclipsed by almost 92%, it was a big meh.  Otherwise, our visit to Llenroc was outstanding!

As I mentioned last year, Steve completely retired in February. He gives retirement high marks and has been keeping busy by teaching himself the art of Stained Glass.  As of the time of this writing, he has completed 3 projects and is anticipating doing 3 or 4 more in 2018.

Halloween is one of our favorite events, and this year we had the gang over and carved pumpkins. Here are some images:

So even though last year was marked with a tragic loss, life somehow has a way of continuing on regardless and we cope as best we can.

We are really looking forward to being surrounded by family and friends this Christmas season!  Brandi’s kids Chris and Becca are coming to visit, and we will celebrate Christmas with Secret Santas and “A Christmas Story”.  May God bless us, every one!

We hope you all have the merriest Christmas and a very happy New Year! 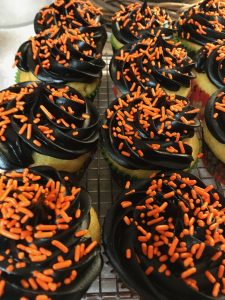 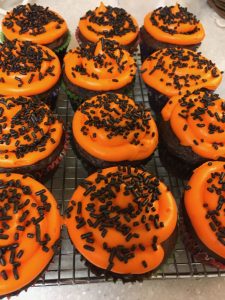 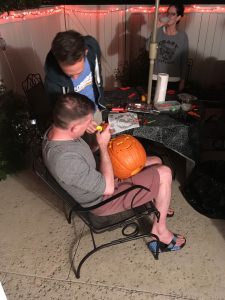 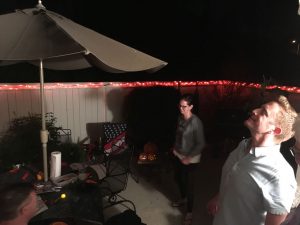 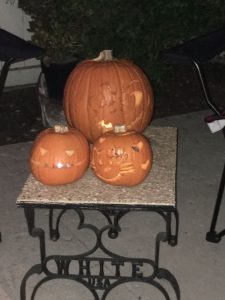 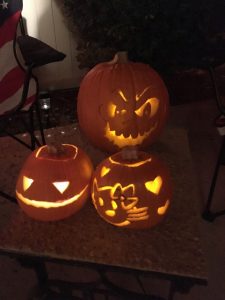 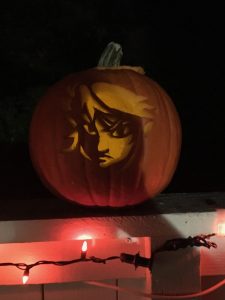 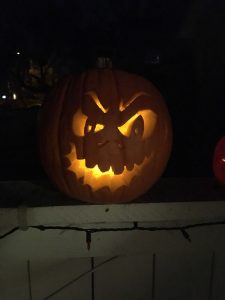 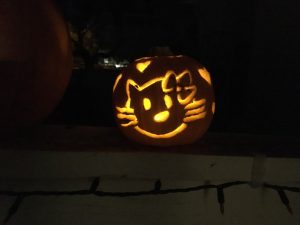 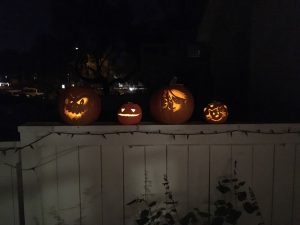 Colleen and Hayley went in a slightly different direction… 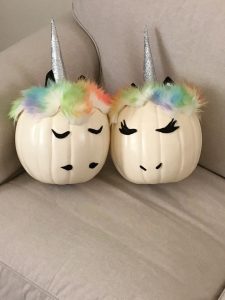 2/19/17 – Congratulations to John and Hayley on their engagement!

Even though they had already discussed getting married, John wanted to have a little event that defined the actual engagement. He planned a surprise proposal that included some family members.

After the actual “Will you marry me” – “Yes!” part, we all popped in to join in the celebration.

They are planning a wedding in the late summer/fall of 2018. 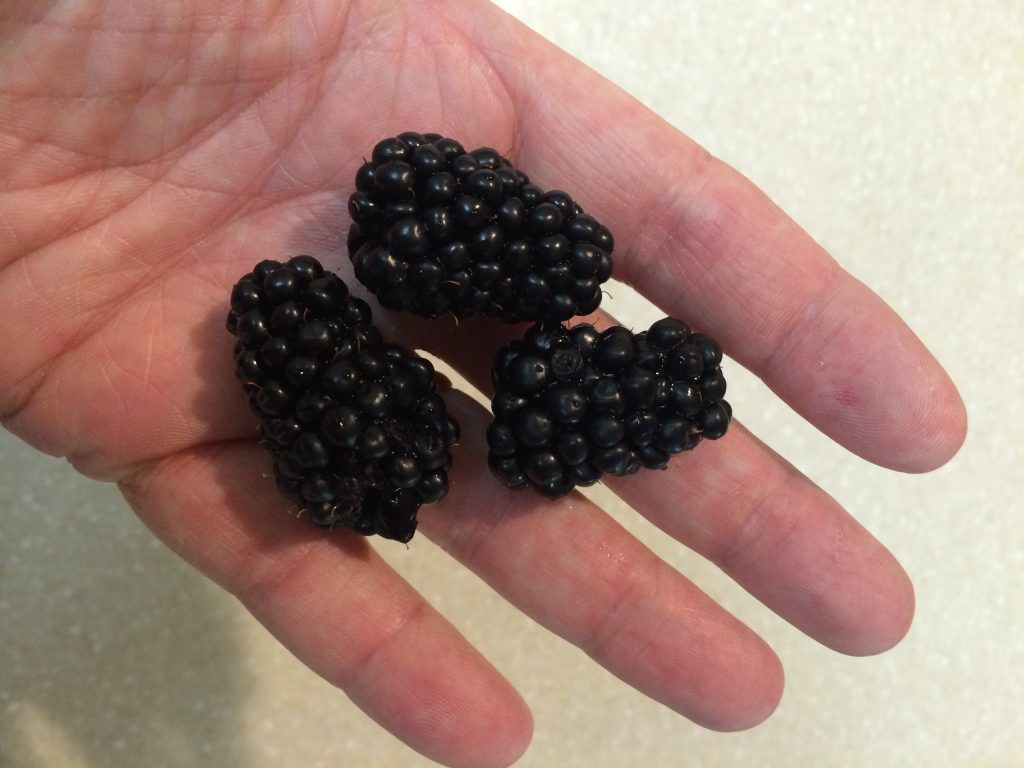 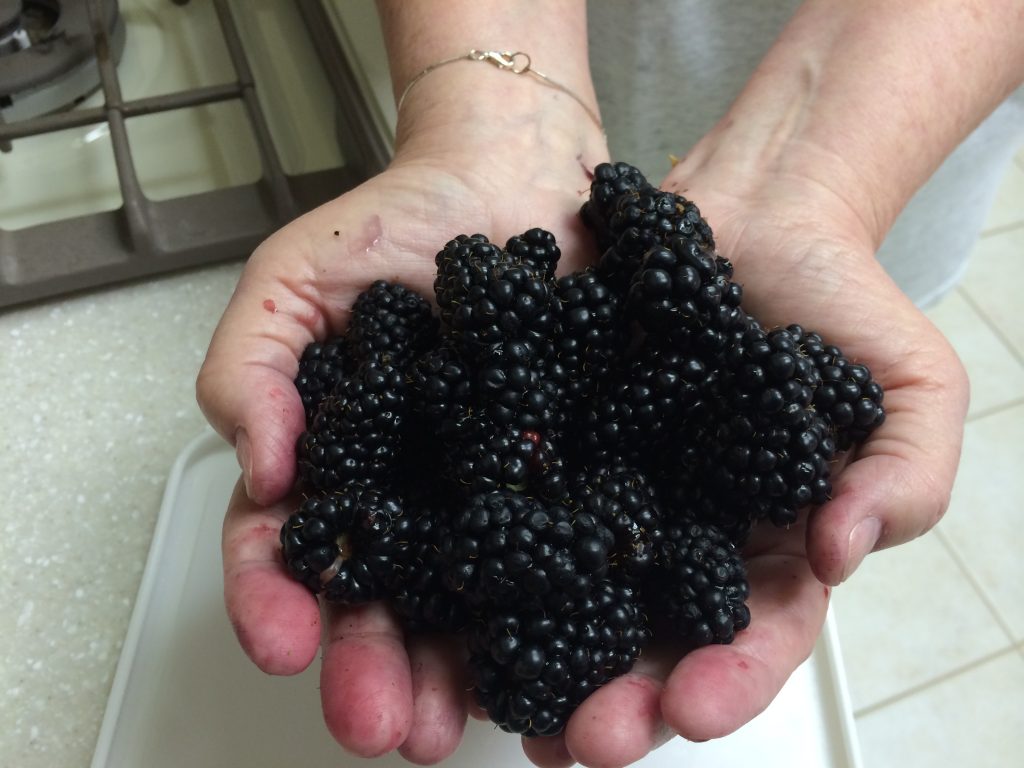 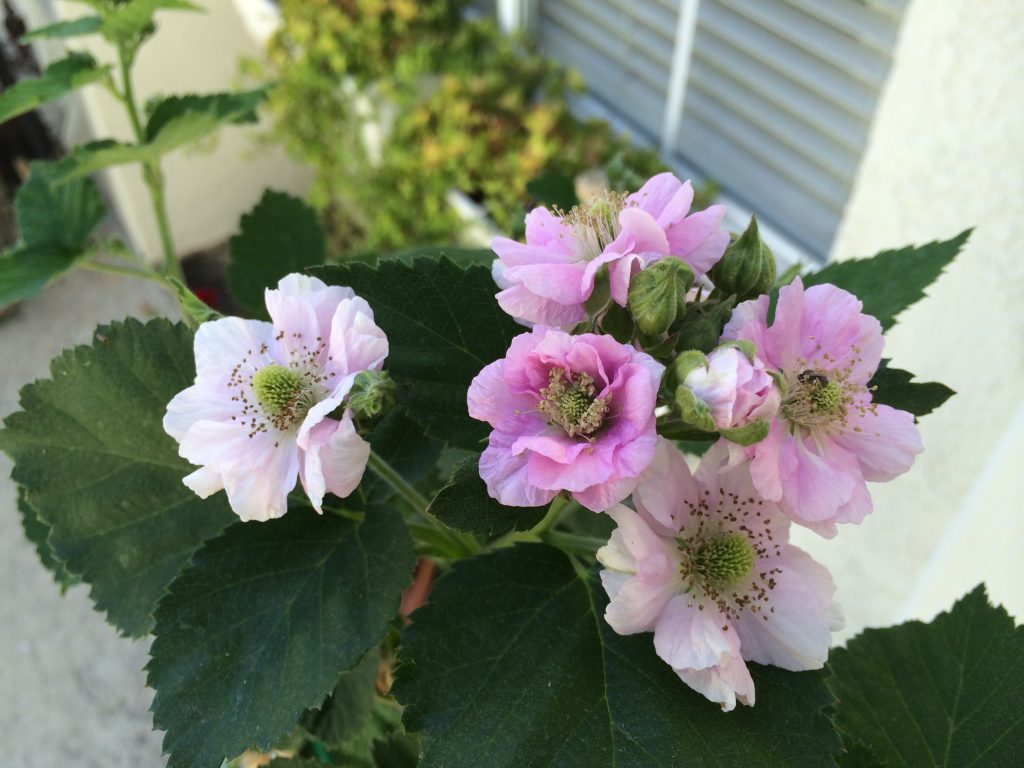 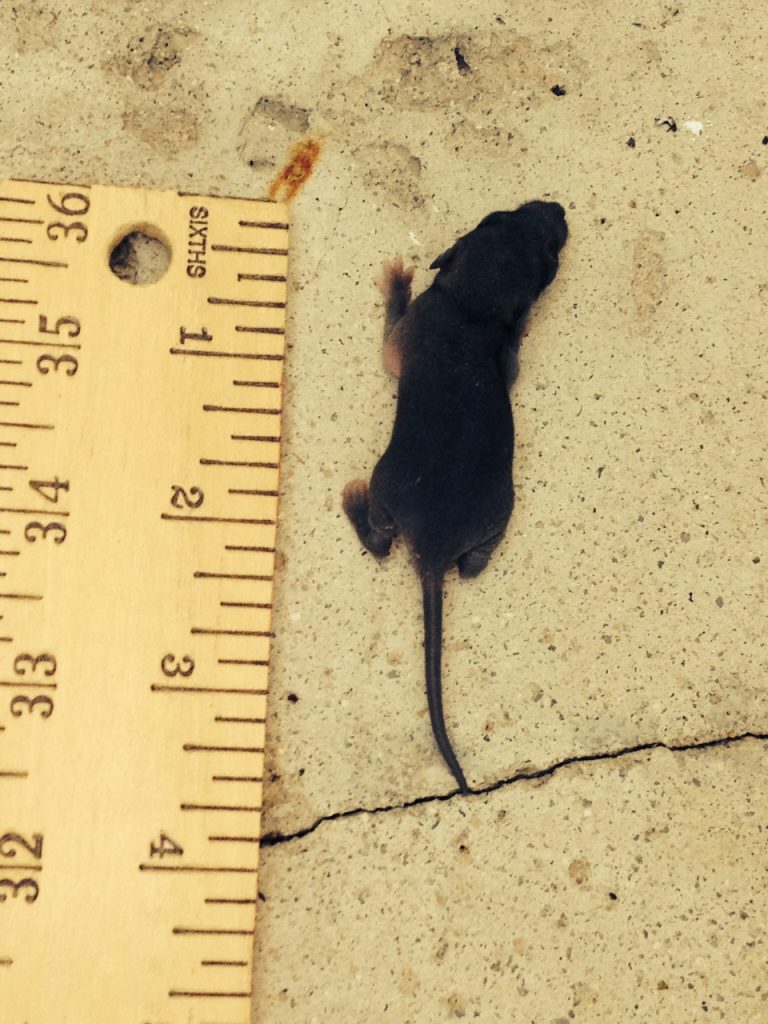 Janette and Rick hosted this Easter’s get together. We had all the usual Easter trimmings including Coffee Cake with braunschweiger and Gramma Boekman’s Lime Jello “Mold”.

About 12 years ago, Colleen got me a wooden model kit of the Flying Cloud Clipper ship. It has remained under my dresser, untouched, until last month when I decided it was time to slap it together and display it proudly on the mantle.

Now, I’ve assembled full-sized cars and motorcycles from bags of parts and put together and customized plastic models for years, so how hard could a little wooden ship be?

It has only been a little over a month, but I have seriously considered giving up several times.  As I’m trying to decipher instructions, which sometimes have little or nothing to do with how to do something, as well as hard to identify drawings that give you just a little peek at the assembly detail you need.  It’s not going so well.

The instructions, having been translated from Italian, contain terminology that gives new meaning to words that don’t seem to have anything to do with the process. The drawings give great dimensional info on each piece, but don’t show key intermediary steps to allow you to see how things are assembled.  And I’m only on the second step!

Putting the planking on the hull of the ship requires you to have a thorough understanding of different types of glue; how to put complex bends in small strips of wood that you can’t purchase in the U.S if you break them; and how to remove cured cyanoacrylate glue from your fingers.  And did I mention that 10 fingers are not enough?

Here are some photos of where I left off while awaiting delivery of replacement strips from Australia. 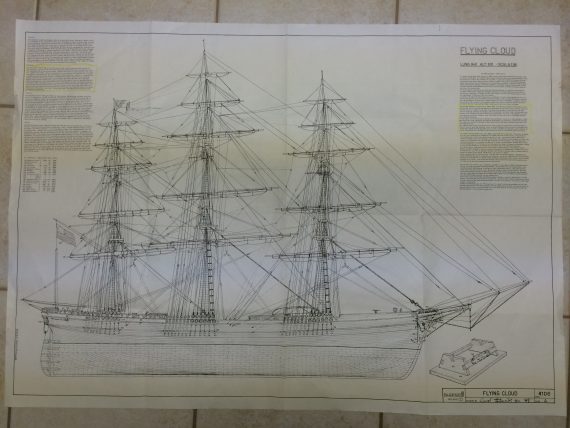 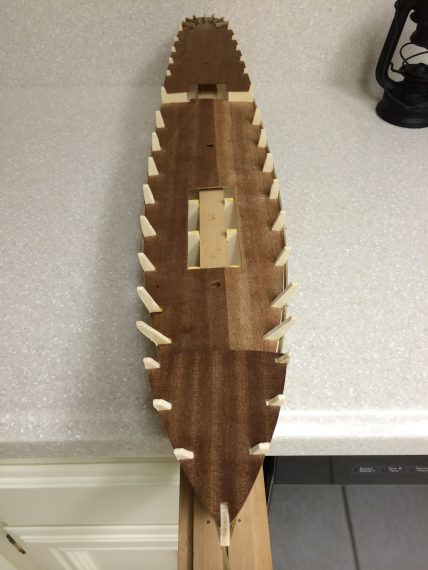 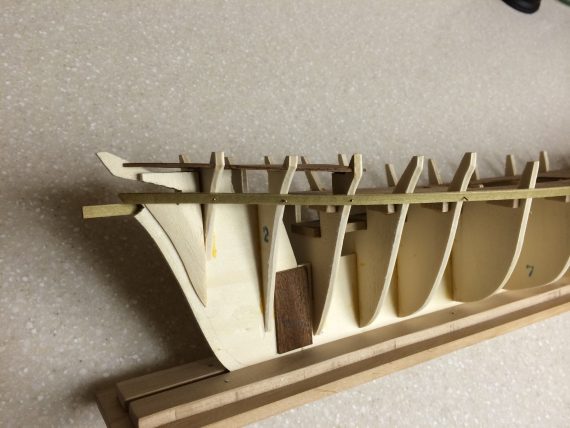 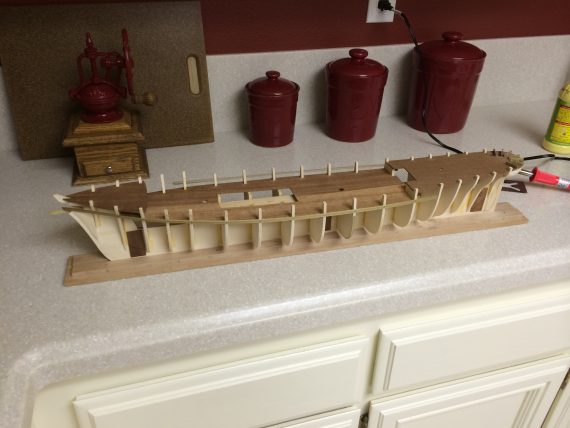 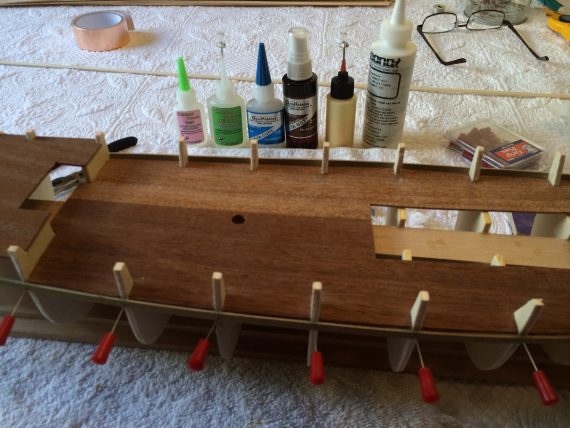 Meanwhile, in Southern California, John came down for the weekend and we accomplished the backyard christmas lights.

Also, Colleen continued with her projects… 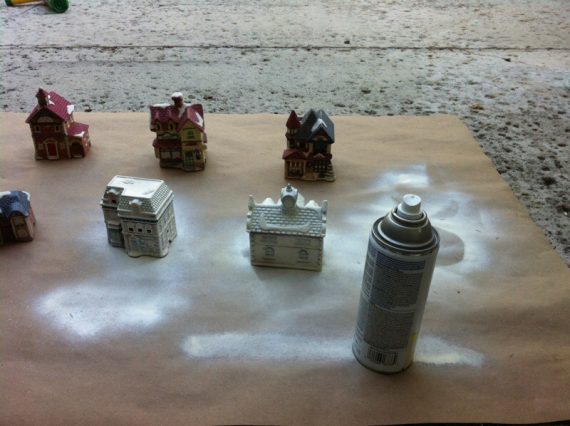 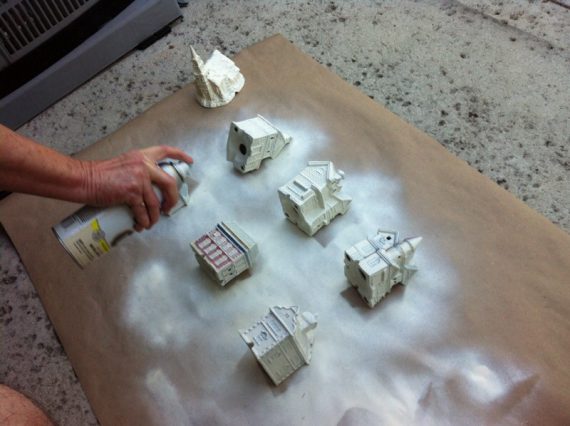 July 3, 2013 – My parents, Lee F Caldwell and Dorothy P Caldwell were laid to rest today in the pasture of Llenroc Farm. Their ashes were combined and they are together again.
We all helped dig the hole in the stony soil, and then Bob led the service where we all had a chance to relate our feelings about Gramma Dorothy.
An extra-long extension cord allowed us to bring Mom’s favorite organ down into the pasture for a little music.